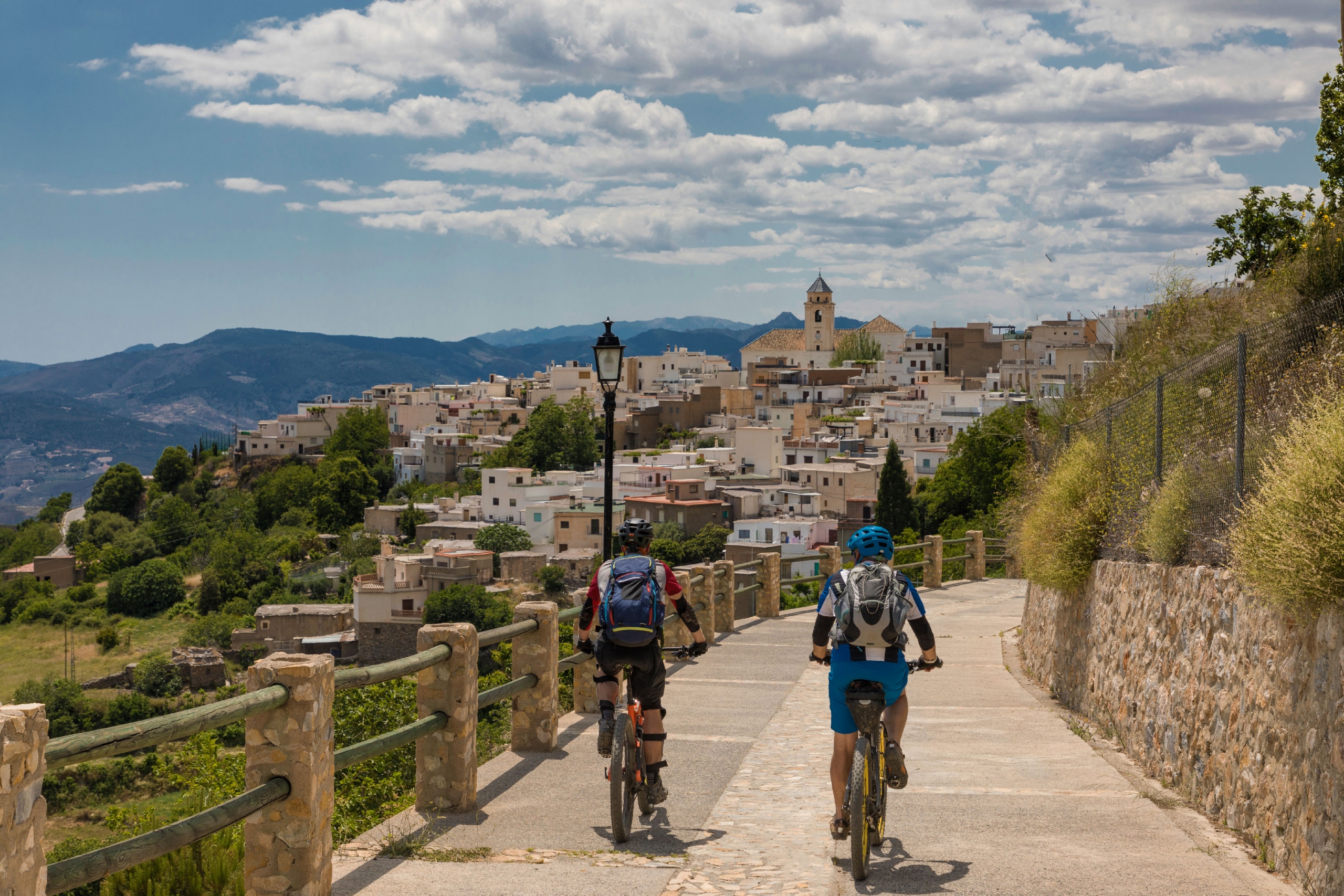 Engage all your senses on this bike tour through Spain’s Andalusia region as you travel from checkered fields of orange and olive groves to historic cities and whitewashed villages. 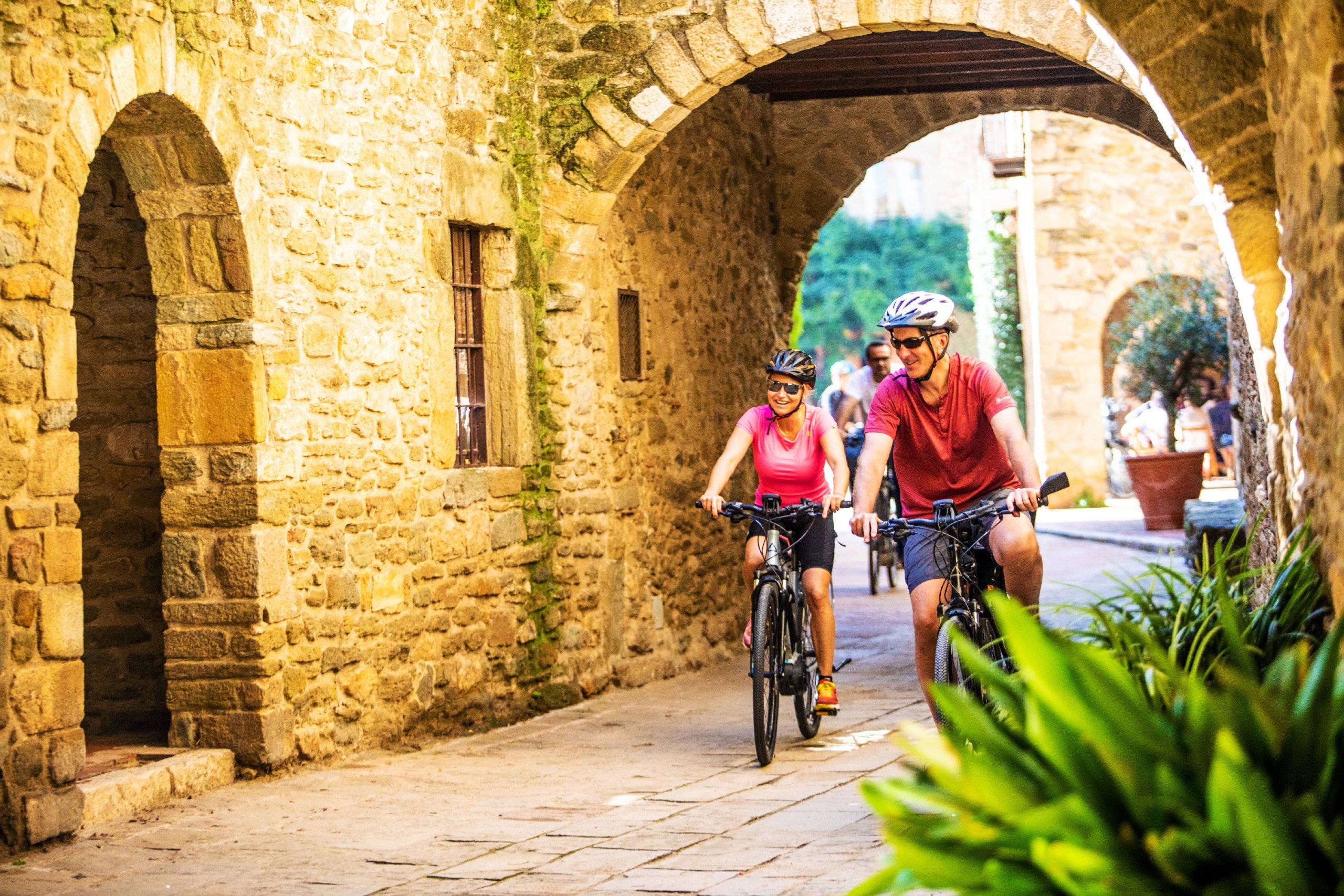 Shimmering coasts, mountain vistas, and medieval villages frame each and every day of your Costa Brava bike tour.

Savor a free-spirited ride on Spain’s Costa Brava. You’ll set your own pace on this inn-to-inn self-guided bike tour of Catalonia’s coastal ranges and medieval enclaves. 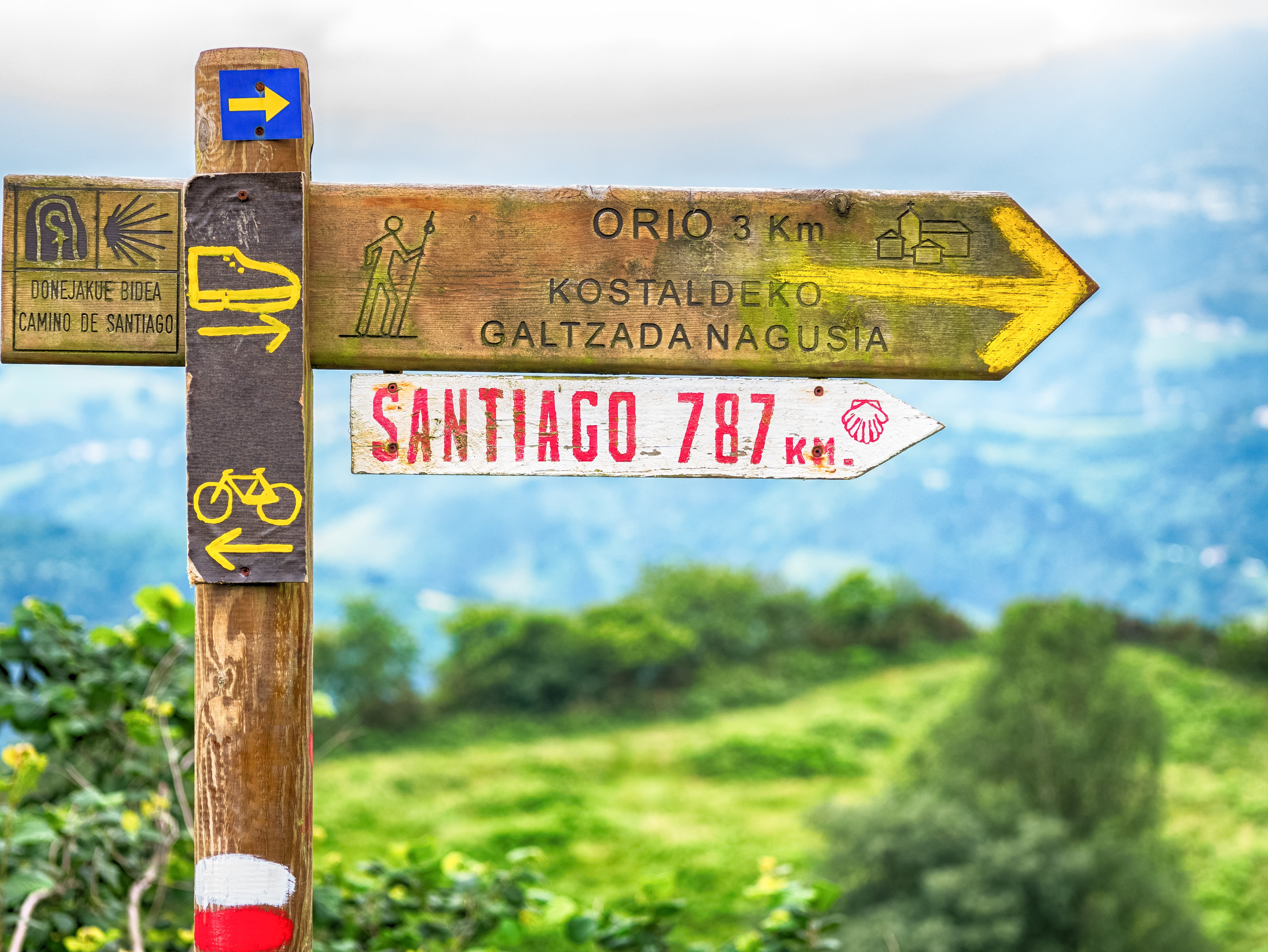 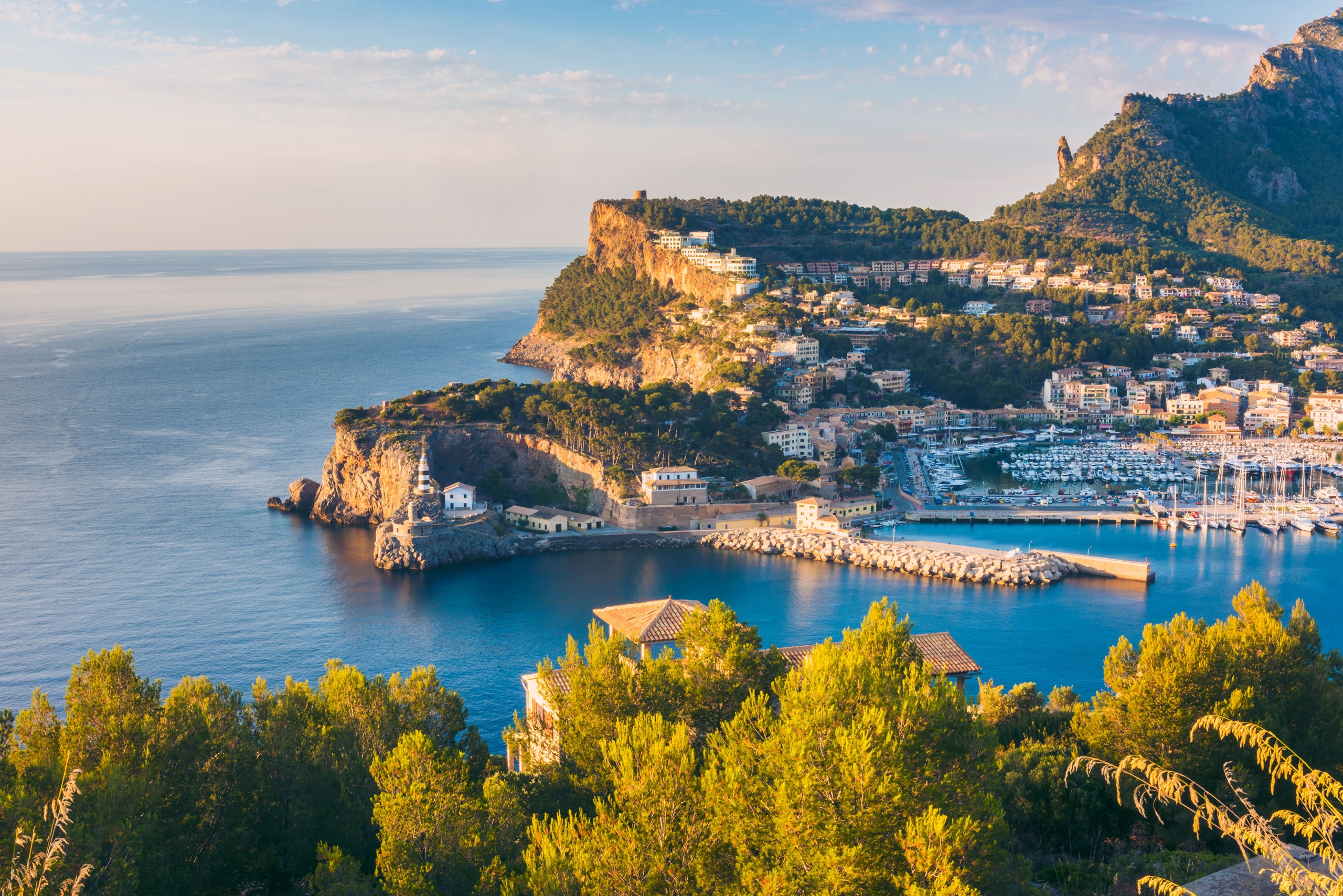 Vibrant cities teeming with artistic and architectural masterpieces, a diverse landscape ranging from snow-capped mountains to golden coastlines, and a thrillingly experimental food and wine scene—Spain keeps travelers on their toes.

View All Spain Tours Talk to an Expert

View All Spain Tours
Choose Your...
Clear All Filters

Shimmering coasts, mountain vistas, and medieval villages frame each and every day of your Costa Brava bike tour.

Starting from 6 days at

Savor a free-spirited ride on Spain’s Costa Brava. You’ll set your own pace on this inn-to-inn self-guided bike tour of Catalonia’s coastal ranges and medieval enclaves.

Engage all your senses on this bike tour through Spain’s Andalusia region as you travel from checkered fields of orange and olive groves to historic cities and whitewashed villages.

In Spain, the concept of la vida buena—the good life—is a driving force. Richly layered cultures thrive here among sweeping landscapes that inspired Cervantes, Dalí, and Hemingway. The jagged cliffs of the Costa Brava spill into the Mediterranean. Sun-kissed white villages and Moorish castles laze under Andalusian skies. Lively traditions and cuisines embody the robust beauty of Basque country. On a VBT Spain bike tour, you’ll find that the good life is the best life as you slow down and experience Spain to its fullest.

From the mind-bending architecture of Gaudí in Barcelona to the world-class galleries of Madrid that play home to masterpieces by Goya, Picasso and other iconic Spanish artists, Spain’s cities are an art lover’s dream. The sprawling Alhambra in Granada, the otherworldly spires of La Sagrada Familia that have been under construction for over a century in Barcelona, Cordoba’s unparalleled Mezquita—the seemingly endless wealth of cultural attractions is almost overwhelming.

Equally expansive is Spain’s famed cuisine. From tapas shared with friends in a casual bar to a five course meal in a Michelin-starred restaurant, there’s a wealth of flavors to be discovered throughout the many regions of this gastronomic paradise. Whether you’re sampling fresh pressed olive oil or sipping wine in a centuries-old cellar, your tastebuds will never be bored on a Spain bike tour.

Explore the surreal Dalí Theater and Museum in Figueres, wander the seemingly endless halls of the Museo del Prado (which houses over 8,600 paintings and 700 sculptures), or take a leisurely stroll in Gaudí’s Park Güell. In Spain art is all around you, as are the remarkable landscapes that inspired these masters.

Take in a Flamenco performance or try your hand at this traditional style of dance. Evocative, passionate, and mesmerizing, this iconic art form is a must see while in Andalucia, its region of origin. Since the 18th century, locals and visitors alike have been entranced by the beauty of Flamenco music and its beautiful dance accompaniment.

Paella in Valencia, gazpacho in Andalucia, patatas bravas in Madrid… Spain’s cuisine varies from region to region, but is invariably delicious and rooted in local produce and traditional recipes. Sample olive oil on a family farm or partake in a wine tasting in an ancient cellar to further your appreciation of the finer aspects of Spanish cuisine.

Our Trip Leaders Make The Difference

Your VBT Trip Leaders are passionate about travel and devoted to sharing new discoveries with you. Each is a multi-lingual resident of your destination who intimately knows the history, cultural heritage, and traditions of your surroundings.

Your Trip Leaders also bring insiders’ knowledge of the best places to explore, dine, and shop—along with insight into local customs and lifestyles to help you make the most of your cultural experience. With keen organizational skills, a splendid sense of humor, and a talent for making you and your fellow travelers thrive within your group dynamic, your VBT Trip Leaders will be invaluable resources—and treasured friends!

Andalusia is a must see for its unique cultural blend, stunning landscapes, and incredible history.

Nicolas has been leading VBT travelers through Spain for over 10 years. His grandfather is from the province of Cordoba, and Andalusia has been his home for the past 14 years.

This tour is like life should be—full of new discoveries and with every new day designed to be enjoyed.

Oriol has called the Costa Brava home since 2001. He enjoys introducing travelers to local food and wine, history, and the stunning landscapes of the area.

I've been living in this area and proudly sharing my passion for our landscape, food, language, traditions, and culture for over 30 years.

A five-year veteran of VBT, Txaro was born in the Basque Country and spent summer vacations as a child in Hondarribia where her grandparents lived. She now lives in a small town on the French side of the border.

The people, food, wine, and lands here were the base for Dalí’s creations… what a special place!

Martin spent his childhood vacations on the Costa Brava. He has lived in the region for 16 years and loves to introduce travelers to the stunning landscapes of the area.

El saber vivir (knowing how to enjoy life) is a common point of pride for the locals here. It can be studied and learned if you know how and where to look!

Roman has lead VBT adventures for more than 10 years. He calls Andalusia home and raised his four children there. He loves to introduce travelers to local foods like potaje which are often overlooked by tourists.

Get Ready for Adventure with VBT’s New 2023 Tours!

If you’ve been waiting for VBT’s new 2023 destinations and tour dates, the wait is over. VBT’s brand new tours are open for booking—and space is going fast!...

5 Historic Sites We Love, and the Stories They Tell

We dug deeper into five of our favorite historic show-stoppers. Each holds a place in history and legend. And each has an epic story to tell. All you have to...

Why is VBT Trip Leader Andrea Excited About our Self-Guided Adventures?

An eight-year veteran trip leader with VBT, Andrea is originally from Slovakia. She moved to Spain to attend university, and ended up staying for 20 years. A former professional rock...