Sicily is a traveler’s dream: sun-soaked beaches and sleepy fishing villages; baroque cities brimming with culture; art, architecture, and history around every corner; and some of the best food Italy has to offer. VBT’s bike tour in Sicily is a perennial guest favorite, and with good reason. But the Italian island has also faced some challenges over the centuries.

Once notoriously corrupt,  Sicily’s local governments and businesses have been standing up to systemic corruption—often under the guise of the Mafia—in recent years. While it poses no threat to travelers spending time there, the Mafia has historically posed a significant challenge to Sicilian business owners. For a long time, they had no choice but to pay the “pizzo”—money given to the Mafia in exchange for “protection.” This protection racket prevailed for decades, until a few brave souls decided to take a stand.

One of these pioneers is VBT trip leader Edoardo, who is a founding member of an organization known as Addiopizzo. Addiopizzo, which roughly translates to “goodbye bribes,” is a grassroots social movement that began in 2004. 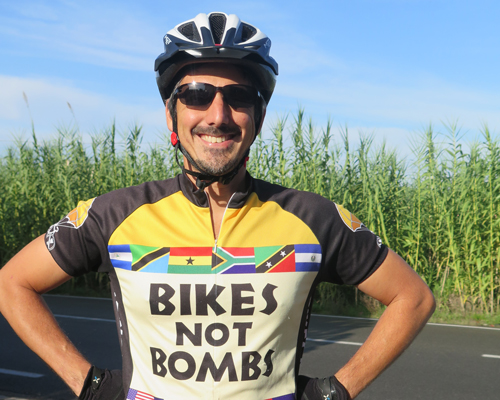 “The '80s and '90s were a terrible time for Sicily because of the Mafia violence,” Edoardo explains. “I spent those years as a child and teenager in Palermo, feeling like there was not much I could do. Then, in 2004, I met other people who wanted to do something to bring about change, like I did. It began as a kind of risky game—pasting stickers with anti-Mafia slogans by night—to encourage Sicilians to stand up against the protection racket. And that’s how the rebellion started!”

What started as a small movement in Palermo today encompasses over 800 organizations, from local shops to national chains. Business owners display the Addiopizzo logo in their storefronts to signal to consumers that by shopping there, they’re supporting businesses that refuse to pay into organized crime.

Edoardo is proud of the changes the organization has been able to affect, and hopes that travelers will continue to enjoy all that Sicily has to offer. “Sicily has always attracted tourists for its history, art, nature, its delicious food and its hospitable people. But the Mafia has been damaging its image throughout the world, like a scar on a beautiful face. Addiopizzo is working to remove the scar and heal the face of Sicily. As a result, the fears, worries, and negative stereotypes that tourists used to have when thinking of travelling in Sicily are finally disappearing.”

VBT is proud to support Addiopizzo as part of our commitment to sustainable travel. You can help too, by choosing to support businesses within Addiopizzo’s network when you travel in Sicily, or by donating to the organization here.