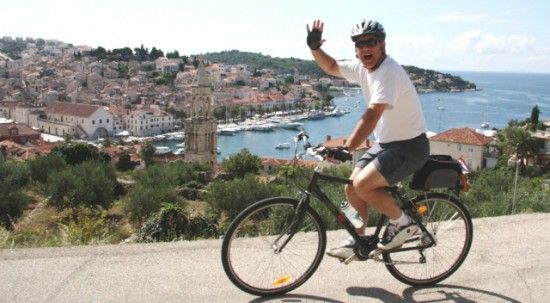 Croatia's Dalmatian Islands lie in the midst of the Adriatic Sea and offer travelers a Mediterranean experience in a tranquil, rustic setting. VBT travelers, Elise and Eric, have been kind enough to provide a detailed account of their experiences on our Croatia: The Dalmatian Islands vacation. We hope you enjoy what they had to say!

We were 15 in the group with two Croatian guides, Milan, and Lada. The only common denominators were our friends Chuck and Heather who'd invited all of us to join them. Some from Angler's, some from Duxberry, some from Vermont and we all got along beautifully. We mixed with everyone well but found ourselves most often with friends Dede and Brian, Warren and Christine, and we spent a lot of that time laughing. As far as athletic ability, we were about in the middle of the pack. In the group of truly exceptional riders was a woman from the Keys, Jill, and a gentleman of 72, John, who has more energy than I did at 22. He even did a hand stand as we said farewell!

Our trip from 9/26/11 to 10/2/11 fell in the off season so it was neither crowded nor expensive. Amazing places right on the water, with gorgeous views and perfect weather and not a soul around, even on a Saturday. There were some treks where we saw no one for over an hour. As the islands are not flat there are a great many switchbacks: a little disheartening when looking up at them on a bike, but absolutely exhilarating when flying down on two wheels.

We encountered primarily Croatians with a few visiting Germans and Slovenians. For the most part the locals speak a smattering of English (with the exception of the word “ice”) especially those in the service industry. In general, Croatians are a kind, calm, down-to-earth people. Even when stressed they seem to bare it with an innate patience and natural grace. Our guides may or may not be indicative of the rest of the Croatians but they were smart, clever, funny, hard-working, responsible, well organized and genuinely caring.

The weather was “pink cloud” perfect - warm sunny days with a cool breeze. The water has been flat calm with the exception of the windward side of Brac. All three boat trips (Split to Brac, Brac to Hvar, Hvar back to Split) were delightful and much more enjoyable than a simple transfer, particularly the Underway Rosé Soirée.

There was excellent food along the way.  All three meals prepared specifically for us were delicious, particularly the octopus salad and the picnic hosted by our guide featuring salami, prosciutto, tomato salad, cucumber salad, tuna salad, cheeses, bread and chocolate bars. Aside from this, other outstanding meals included mussels and clams marinated with garlic and olive oil in a large skillet, fresh Greek salad, pasta marinara, and fried sardines. They excel in olive oil, honey, figs, cheese, mussels, dried meats, lamb and fish. Likewise there are some wonderful locally produced wines. The standards everywhere are olive oil, fresh bread, rich coffee, and home-made grappa. They are served as an aperitif as soon as you arrive and after a sincere look-everyone-in-the-eye “Jivoli!” it's down the hatch all at once. Unlike the Italian version, this does not seem to take its toll on the head the next morning but does loosen the tongue within a few minutes.

The bike rides were well planned out so that each day we were presented a choice of distance. For example, a typical day would offer a short (18km), a medium (34 km), and a long option (54km). Riding in the van for a stretch or for a lift back to the hotel was also available. Out of a possible 240 km, we rode all but about 30. For one “killer” climb a few of us rode in the van to the top. We estimated it would be an hour for those who'd chosen to cycle to get to that point. However, only ten minutes after parking at the summit, Dede and Stephanie appeared, barely winded. The greatest aspect of the trip is that it absolutely integrated mind and body as it took both to achieve the destinations. It wasn't a dangerous trip, but required attention to the “here and now.” And with these two in sync, soul came out to play as well.

The vistas were breathtaking; huge expanses of the Adriatic and Dinarides mountains, tiny villages, miles of black pines and lavender fields, and churches, lots of churches. Accurate descriptions would have to include ancient, authentic, and awesome. For beauty, for adventure, and for fun, this has been an unparalleled trip. Thank you to Chuck, Heather, Dede, Brian,Warren, Christine, Stephanie, Coco, Greg, Jill, Jill, John, Linda, and our guides Lada and Milan.