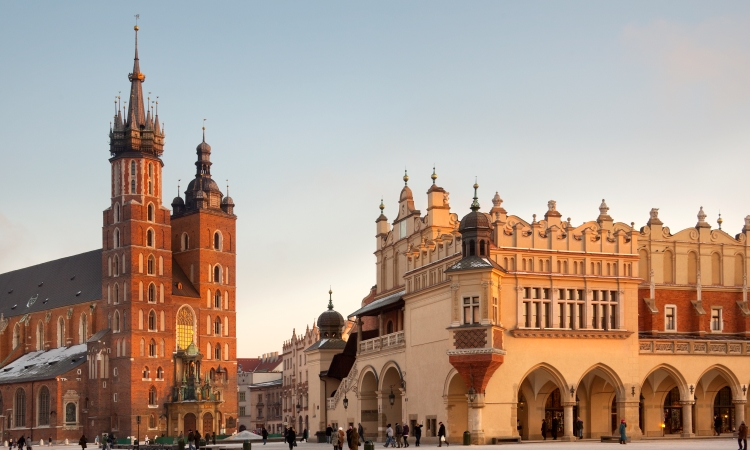 The Polish capital city of Krakow is rich with history and an intriguing heritage of culture, art, and intellectualism. With its roots as a settlement dating back more than a 1,000 years, the winding stone streets of Krakow are teeming with fascinating remnants of the past.

Stone Age Origins
Krakow's history dates back to the Stone Age, when a Slav settlement was built on Wawel Hill. The hill is surrounded by the flowing Vistula River, which provided security for the settlers and remains a defining feature of Krakow today. The first documented instance of the settlement being referred to as "Krakow" is from the year 965, and by that time it was a bustling European trade port, according to Magic Krakow. The name comes from King Krakus, the ruler of an early tribe and, according to myth, the founder of Krakow.

The Legend of Smok the Dragon
Krakow's origins are also tied up in the legend of a dragon called Smok Wawelski. The story goes that the fire-breathing Smok lived in a cave under Wawel Hill and terrorized the settlers, eating young maidens and livestock. Krakus, angered by the ongoing destruction, promised his daughter's hand in marriage to any man who could slay the dragon. Many people tried but failed. A lowly cobbler, however, had an ingenious idea. He sewed together lambskin, filled it with sulfur, and then left it on the banks of the Vistula, waiting to bait the dragon. Smok fell for the plan, ate the lambskin and exploded when the sulfur caught fire in his belly. Thus, the dragon was gone, and the city was saved.

Today, the legend of Smok is still alive and well in Krakow. In front of Wawel Cathedral you can find a popular statue of Smok, which breathes fire on a timer, and by the entrance hang several bones which are said to be from the dragon and possess magical qualities, as In Your Pocket explained.

The Largest Medieval Market Square in Europe
The historic center of Krakow is a UNESCO World Heritage Site, recognized for its stunning demonstrationof various architectural styles from the Romanesque to Modernist eras and impressive urban planning. The city center includes Krakow's main market square, which is the largest medieval market square in Europe, where visitors can still browse bustling market stalls and chat with vendors selling artisan goods.

Also found in Old Town Poland is the historic district of Kazimierz. Kazimierz was founded in the 14th century and became a primarily Jewish neighborhood, with the oldest synagogue in Poland being built there in the 15th century. Many Jewish intellectuals and artists made their homes there, and today Kazimierz is a vibrant neighborhood of cafes and galleries.

Discover Krakow and its fascinating history for yourself by joining our Poland: Cycling Through the Old World vacation which includes a post-trip extension in Krakow.