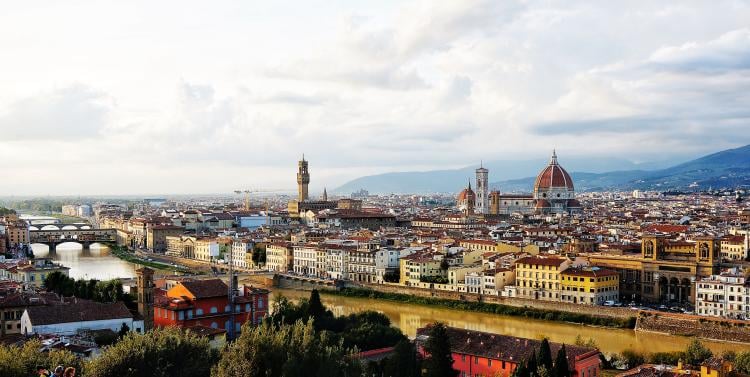 On September 8, 1504, in Palazzo Vecchio in Florence, Michelangelo unveiled one of the most recognizable contributions to the Italian Renaissance, David. Though the 17 foot statue took three years for Michelangelo to complete, its conception began well before the famed painter and sculptor began working on it.

In the 15th century, overseers of the Basilica di Santa Maria del Fiore, or the Florence Duomo, set forth a plan to commission a series of artists to sculpt representations of notable figures of the Old Testament, intended to decorate the exterior of the Duomo. Donatello lent his talents to sculpt Joshua, and his contemporary and probable student, Agostino di Duccio, later produced an interpretation of Hercules to complement the Duomo. In 1464, Agostino was once again selected to provide another sculpture, this time of David, the biblical hero and king who defeated Goliath. Agostino was provided with a 19 foot slab of marble, and after three years and minimal progress, the artist abandoned the project, unfinished. Ten years later, Antonio Rossellino began a short-lived attempt at completing the sculpture, but he was quickly decommissioned.

The slab of marble was neglected, and left exposed to the elements for over 25 years, until the council of overseers determined that David must be completed, artfully and successfully. They elected 26 year-old, Michelangelo, for the task and on September 13, 1501, the young artist officially got to work.

In early 1504, when the statue was nearing completion, it became obvious to Florentine officials that it would impossible to place the 17 foot high, 6 ton sculpture anywhere on the buttresses of the Duomo. Another committee formed to decide the proper place in Florence to feature David. After considering nine locations throughout the city, the committee ultimately decided that David would rest in the Palazzo della Signora (modern-day Palazzo Vecchio). After a four day, half-mile procession, David was eventually displayed in the Palazzo della Signora, on September 8. The sculpture remained in the public plaza until 1873 when it was moved to Galleria dell'Accademia, where it could be better protected from natural wear.

The Duomo’s overseers never saw a true fruition of their plan to adorn the Duomo with 12 figures of the Old Testament. However, after almost a century in the making, the concept ultimately yielded one of the finest and most recognized pieces of art to come out of the Italian Renaissance, Michelangelo’s 17 foot tall, marble sculpture of David.

Join VBT on our Tuscan Coast or Tuscan Hill Towns by Bike vacations and experience one of Michelangelo’s most celebrated works of art for yourself.