John Freidin, at his home in Bristol, Vermont, rolled up his sleeves, took a bite of his locally caught perch sandwich and sighed. “Well, where should we start? I’ve got miles and miles of stories to tell.” 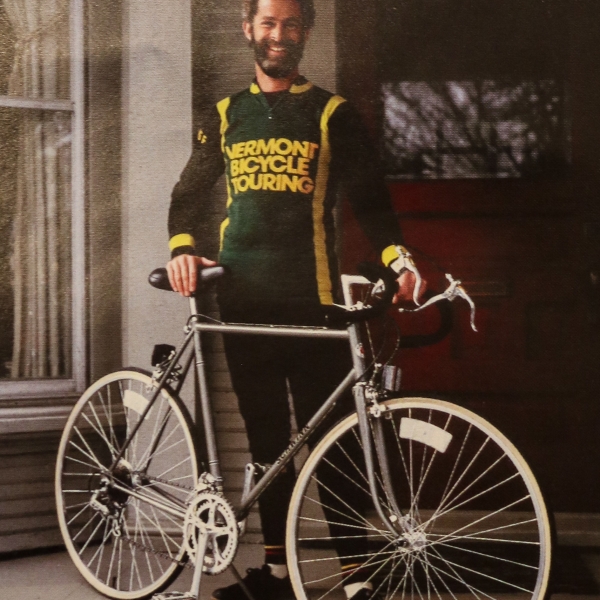 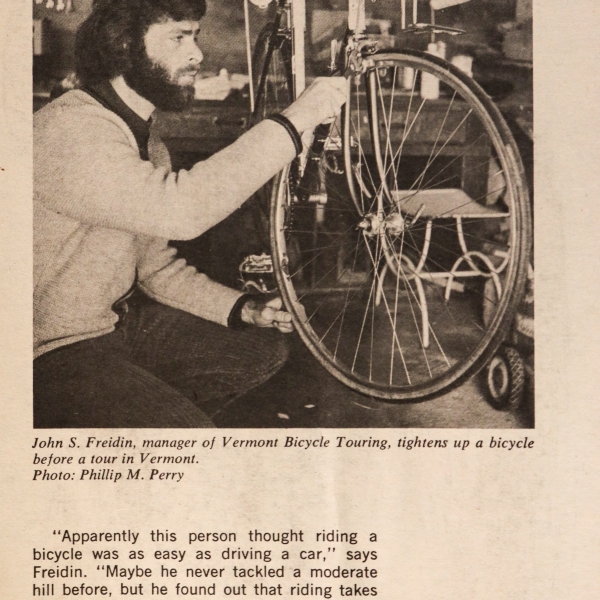 Back around 1970, he was a history professor at Middlebury College when he took off on a two-day bike trip and returned with a business idea that would last for the next 50 years. “It was splendid…the cycling, the scenery, the fresh air and especially the affection that grew among me and my friends. We were stranded one night with no place to sleep but still having a great time…I thought, imagine if we had accommodations!”

And with that, inn-to-inn cycling was born. Offerings included The Weekender, Three Day Rambles, and Vagabond Outings. Just 47 bucks would get you 3 meals a day, 4 walls at night, and a 10-speed bike. Carefree and simple is how John put it. “We were a little family. The guides were quite the bunch—from ski bums to librarians, they were all looking to live life a little wild…for the summer at least—everybody was a hoot.”

John comes across as a lead man from the golden age of Hollywood. His distinguished voice was made to be listened to.

“Traveling by car to me was always forgettable. It’s a blur. But by bicycle you’re invited into the natural world. You’re a part of it. You hear the sound of a stream, you meet the occasional bird companion, you see the kids having a ball on the tire swing. Things too small to notice from a car are huge discoveries on a bike.”

He thinks fondly of those crazy years and compares the time to riding downhill. “People always think the times when you’re going fast and going downhill are the best part of life…but there’s something about the time until the next hill too…the battle of going up. Putting in the work to get to the top. It’s quiet. There’s no wind. No whooshing. Just your own labored breathing and the rhythm of the chain going ‘round and ‘round.”

He turns his attention back to his sandwich and then he starts to recite some of the people who stuck in his head over the years. “I remember one business man from New York City came on tour and one night after dinner, in some cozy inn, he said, ‘John, I’m used to having to watch out for taxis, cars, buses and pedestrians, and I always thought they’d be the ones to kill me but really it’s these darn hills.’”

His eyes lit up as a memory shot through his brain.

“One time, Paul Newman came on tour…and he fit in to the group like everybody else. The great thing about biking is that everybody is on the same playing field—you all have to pedal the same amount to get to the same places.”

He went on about their experience together and you could tell it was a special memory. “We went to a diner together, a real Vermont diner, in an old railroad car or something, and the woman working the counter didn’t even blink after seeing Paul Newman sit down…he asked about the tomatoes and she looked him right in the eye and said ‘they are round, red and ripe’…he didn’t ask any more questions after that!” he said with a big laugh.

Listening to John, you get the idea that he knows how to let loose. I mention that to him and he humbly agrees. “You know, we used to throw the best holiday parties in all of Vermont. For Halloween, the goal was to dress and behave in a way that no one from the company could know who you are. For Labor Day, we had a tradition where all the guides would do almost a hundred-mile ride and end up at a swimming pool somewhere that needed to have two things: champagne and pizza.”

“Reminiscing on all this makes me realize that I started out with an answering machine and some stationary and ended up with a lifetime of memories.”

Nowadays, after traveling everywhere from Sri Lanka to the Serengeti, John enjoys creating his own slice of heaven in Vermont, playing an occasional game of poker, perfecting his honey-based martini, and painting. “My painting is very abstract—I was never obedient enough to follow the rules.”